Blog
You are here: Home / Blog / Uncategorized @en / Silent watchers of the plains

There is something about Cheetah. Something I do not see nor feel with leopard or lion. Meeting them brings immediate silence inside me. 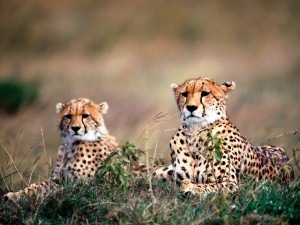 I am fascinated by their observative appearance. They are like statues in the landscape, without movement for a long time, just watching, totally alert. Maybe it is my meditation mind, recognizing total presence in their bodies and their eyes. And I know what happens with a living creature, being present and with attention for many hours in the now. Something alive and sweet will enter, not hindered by distractions, anxiety, fear or boredom. And yes there is a sweetness in this preditor, something vulnerable in their charisma.

Also looking at their young brings a kind of tenderness in my heart. Vulnerable but totally alive, funny and naughty will make you want to nurture them. 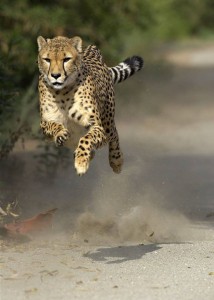 These silent watchers of the plains have unbelievable skills. Cheetahs use exceptionally keen eyesight to scan their grassland environment for signs of prey—especially antelope and hares. With acceleration that would leave most cars in the dust, a cheetah can go from 0 to 116 kilometers) an hour in only three seconds while hunting and he is capable of making quick and sudden turns in pursuit of prey. This action can only last 1 to 2 minutes. After that his energy drops and he will be exhausted, empty and unable to eat or chase anything for hours. 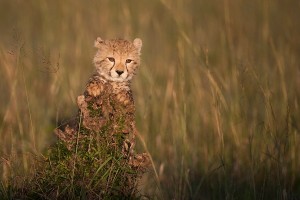 Female cheetahs bare about three or four cubs. They raise them alone and show remarkable intelligence and self sacrifice for their young. In the movie African cats you will see a Cheetah mother threatened by the coming of four male lions, give a performance of great cleverness and bravery to save her cubs. She shows herself to distract them and tries to get them after her by irritating and provoke them. It works and they come after her. She hardly makes it herself but finally gets rid of them. She loses two cubs but finds two of them back. If she had done nothing, she would have lost them all. Heartbreaking is the image of her sitting on a rock in the night, silent without movement, waiting for her lost cubs to come to her. Her longing for her cubs can be felt but her dignity never leaves her in front of the cruel hand of life.

I love cheetah. It is her silence that touches me deeply and makes her behaviour and experiences more profound. Enjoy this trailer of African Cats like I did when I was flying to Tanzania in the middle of the night. You will not regret.

Splashy Clothes or a safari to Tanzania?

Why is travelling exciting?
Scroll to top