Blog
You are here: Home / Blog / Uncategorized @en / Leaving a safe world behind

An adventure means to leave your safe world behind and follow your nose because there is no map to guide you.

Four years ago I started sponsoring a Masaï guy of 22 years old to study in Arusha and become a teacher. One year later I travelled to Tanzania to visit him and to meet his family in Ngorongoro. At the airport I immediatly was confronted with the police because they asked for my vaccination papers, which I did not take with me. It costed me $ 50,- to buy a fake paper from him. Now I know I should have refused because they can not force you and after some intimidating behaviour will let you go.
In Arusha I stepped out of a taxi and I see three black guys with dark sunglasses in a typical macho way of walking come towards me. Was I really going into the ghetto with them? That night I slept in a room with a strong door and bars in front of the window, which stimulated my nightmares. I was lying in a double bed with a young girl and two black guys were lying on the floor. All night (and the next ones to come) the neighbors were repeating very loudly the same music of the Bongo flava hit of that moment. Can you see the situation? I did not sleep much that night. I had arrived in a totally new and unknown world and my mind was clearly awake. 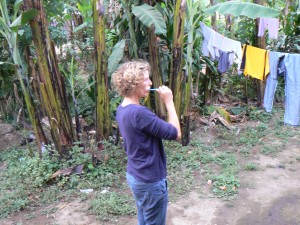 The first evening I was introduced to the sister of my student. He told me she ran away from home to Arusha to escape from forced marriage. She looked like a girl that lived for a long time on the streets. Her appearance was unhealthy and she suffered from stomach pains that are very common in Tanzania because of lack of food. What can you say confronted in such a visual way with the hardship of their lives?

A few days later we left to visit his family in Ngorongoro. Everything was an adventure to me. The aliveness of the bus station early in the morning, the way black men were jumping on me to sell a bus ticket of their company, the baskets with bread, eggs, nuts, cakes, fruits and other stuff that appeared at my window once I had seated. And do not forget the smell, the typical African smell that comes to you the moment you enter Tanzania.

After two and a half hours we arrived at Karatu. Karatu is the last town before entering Conservation area Ngorongoro. So you can imagine the special character of this town. First of all it has red, dusty roads and houses. Many jeeps that transport tourists drive through the main street and are parked in front of multiple restaurants, shops with tools, sleeping accommodations, many banks and supermarkets. You can even get real coffee here.  And everywhere you look you will see Masaï men and women in their colorful shuka’s.

After stocking up a lot of food for the village, we find a local jeep to transport us and many other Masaï to the home village of my student. I am invited in the front and accompanied by the cheerful sounds of Tanzanian music we are on our way to the gate of one of the most beautiful places on earth.

Glady is getting married soon