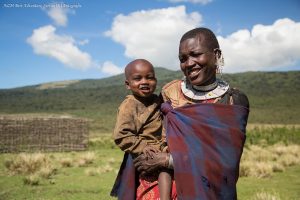 The emancipation of Maasai women in Tanzania still has a long way to go. In the cities is some movement. Especially young women are becoming aware of the sex differences because of the internet and sometimes in their contact with Western people.
In modern Tanzania having one woman and monogamy has become the standard under the influence of Christianity. Although men regularly reveal to me that the first African man who does not “cheat” on his wife more then once, still has to be born. The women seem to tolerate that and keep silent. More important in this third world country is that they have his children. Those children give her a certain guarantee to be first in his life and this way they ensure a house and enough to eat. The modern women work outdoors but are generallyexpected at home.  For example, it is allways a man who will join me on a trip. If I ask a woman to come, many times she refuses.

Maasai women do the work 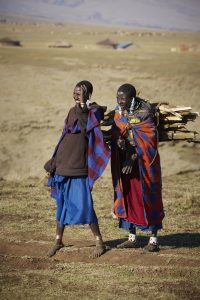 In the villages the position of women is more dramatic. Somewhere in history men have created a monopoly on taking the important decisions. They must have succeeded on the basis of physical force. And this is how it works still. For example: Masaí women have nothing to say and if she gives an opinion which is inconvenient to her man, she risks being beaten.  Traditionally they do most of the work; building and maintaining the houses, cutting down and transporting wood, fetching water, washing clothes, cooking, taking care of cows, goats and sheep, searching for roots; a kind of spinach; herbs and berries and of course teaching children. “What will remain for a man”: you’re soon asking yourself during your long stay in the village. Generally you can see men hanging around with or without spears, keep interesting meetings with each other, have a beer at the local “drink” villages, singing in Church, leading church services, leading to the village, wandering around in the bush and visiting family in neighbour villages.

Maasai Women’s rights
Maasai women’s rights are not existing is assured to me by men and women. Her position is certainly not improved by maintaining the tradition of polygamy. A Maasai man may marry with multiple women. By example outside of Arusha resides a man who has married 148 women. His boma is almost a city. Polygamy sounds like fun (for men) but in practice it’s not funny at all. A man usually has a preference for one of his wives. And then unintentionally a preferential treatment can sneak in to her and her children. So it can happen that the favorite woman retains all her cows and the second woman loses all her cows from the dowry. The man sells the animals of the less popular woman in case of famine or disease. If he dies or leaves her, she has nothing.

Losing her children
The most painful story I heard was the story of J, a young Masaï woman. J was married off to a young man. They had two children. After 3 years of marriage, he married a second wife. Soon the neglectance of J and her children began. This meant that J and her children diddn’t have enough food and she got beaten if she protested. Also the tension between the two women ran high and J apparently reached a point where she was forced to run away with her two children. She went back to her mother, and hoped her family would negotiate with her husband on a return basis. The best outcome would be that her position would improve. Instead her husband came to take away her children and made clear he diddn’t want her back. J had no rights as a mother to her children and she lost them forever. Maasai children are owned by the father. 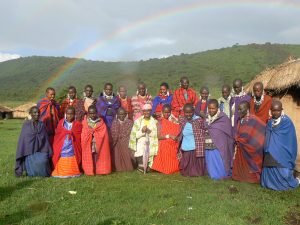 In general Maasai men have many privileges compared to Maasai women.
The shift that slowly becomes visible, is primarily due to education and to the contact between local people and Western people. By example, I believe that Rama’s daughter, who is now studying for safari cook (mentraining) in Arusha, can go for this because her father, for over 20 years, has a lot of  contact with Western people at his work and is influenced strongly by them.

Cross the line
I feel good when my eyes see the young and older Maasai women of Endonyowas, in front of the men and my travelers, cross the line, when I ask them: “who feels that women should be treated more equal to men”?  They went together without hesitation over the line. That shows something.

The tree and the prudish flowers